Couple months ago I attended Lunar and Planetary Science Conference (LPSC) 2017 in Houston, Texas. Of roughly 3000 talks and posters presented there, I’m sharing summaries on twenty that I personally found most inspiring or thought-provoking.

Disclaimer. I am a physicist by education. I generally understand the language in use at LPSC. But I am not a planetary scientist. My selection of articles is almost certainly subjective and biased. My interpretations may be incorrect. If anything serious (such as your job, finances, or professional reputation) depends upon the accuracy of my narrative, I’d suggest verifying it with the authors. Their contact info is available within the referenced abstracts.

Titan, Saturn’s moon, features extensive set of lakes and seas (called lacus and mare) filled with liquid hydrocarbons. Sunlight reflecting off them has been photographed numerous times over the past ten years: 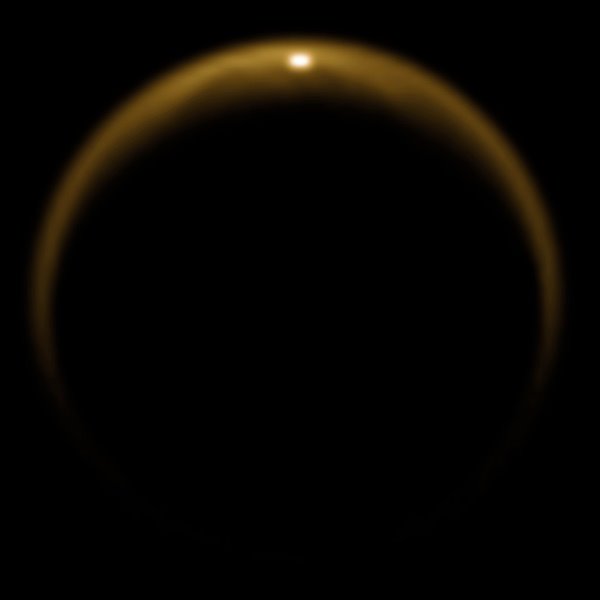 However, sometimes similar bright spots are seen at locations with no lakes. Moreover, the effect is transient. On one Cassini flyby it glitters, but not on the next one with very similar geometry. What’s going on?

As an explanation, a “wet asphalt” hypothesis is proposed.

Suppose a methane rain pours over a rough surface similar to asphalt in texture. “Asphalt” gets wet and starts reflecting the sunlight, just like it happens on Earth after rain: 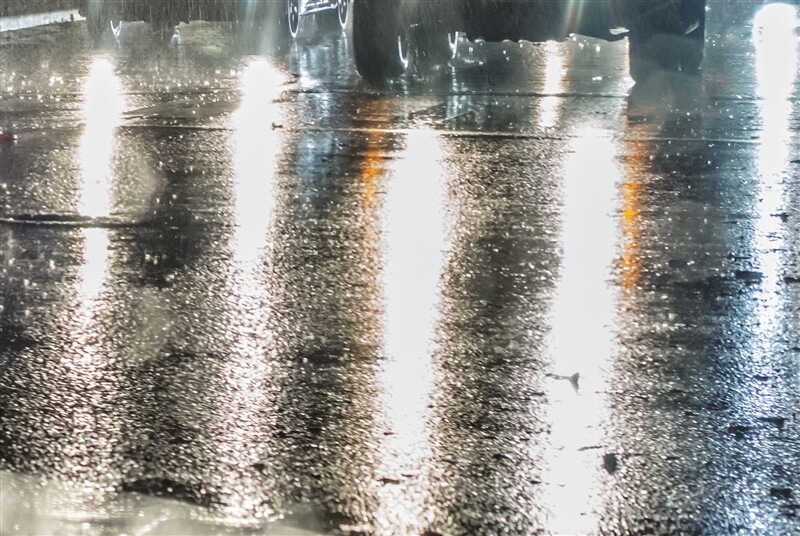 By the next Cassini flyby, it all dries out — and we see no bright spots anymore.

This talk is about Titan’s hydrosphere, too. Except that the “hydro” part is not really appropriate, since there is no water in Titan’s lakes and seas. Instead, they are filled with liquid methane (CH4), ethane (C2H6), and nitrogen (N2). But we poorly know their proportions and don’t know well how they interact under Titan’s conditions.

After cooling those three gases to cryogenic (-300F…-350F) temperatures, the authors studied how they mix and freeze under various temperatures and pressures. What they found makes Titan’s hydrosphere a far more complex system than Earth’s oceans. Well, that is somewhat expected if three, not just one type of “water” and “ice” play together.

First, methane-ethane mixture freezes under lower temperatures than either of those gases. Thus, they act as mutual “antifreeze”.

When they solidify, methane ice floats to the surface, while ethane ice sinks to the bottom. The initial concentration defines which ice forms first. This is more complex than what we see on Earth, where ice always stays at the top:

Addition of nitrogen (simply from the atmosphere) increases solidification temperature of the mixture and thus can cause sudden freezing of the liquid. And another LPSC publication suggests that nitrogen dissolves very well in liquid methane – but rather poorly in liquid ethane. As a result, evaporation of methane from the mixture could trigger bubbling nitrogen release from a lake. As if it was filled with sparkling wine, but at -300F and with nitrogen bubbles instead of carbon dioxide.

And here is the most interesting observation. At pressures exceeding 2.5 bars (corresponding to depths over ~300 feet on Titan) methane-ethane-nitrogen mixture separates into two liquid phases. There was an amazing video in the presentation on that, but here we’ll have to resort to a single picture: 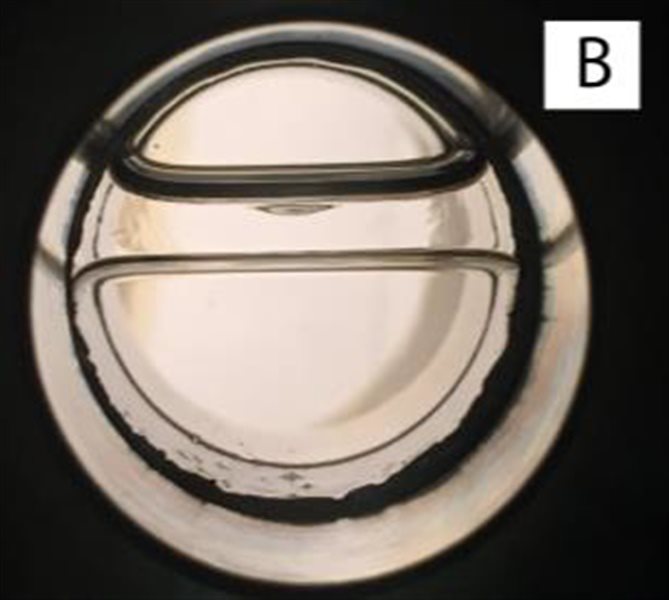 Gas is at the top of the experimental cell. The next layer is ethane-rich liquid. Underneath it is the second liquid phase rich with nitrogen. And at the “ceiling” of the first liquid phase you can see a tiny hint of a droplet. That is the 2nd phase condensed. Insoluble in the first phase, it flows and drops through it just like water through oil.

When I saw that, I immediately thought of layered seas possibility on Titan. Did you think of the same, too?

CLASSIFICATION OF LABYRINTH TERRAINS ON TITAN 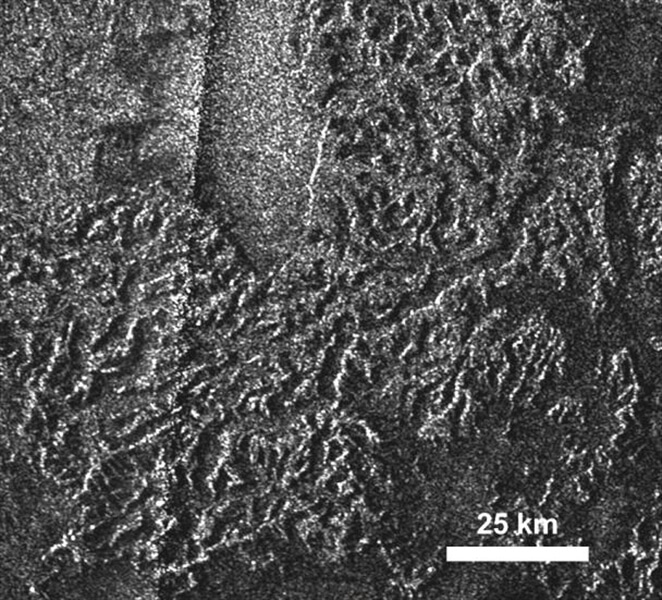 Their nature and origin and aren’t completely clear. At the first glance, they look like riverbeds – and we know there are rivers on Titan. But if you examine them carefully, you might notice that some of those labyrinths are… closed. They don’t “flow” anywhere!

Does it mean at least some labyrinths are not riverbeds? The authors conducted morphological analysis of labyrinth terrains and concluded that at least some of them could be… karsts!

Even if that is the case, we still don’t know whether they are produced via material evaporation, wash-away, or dissolution. But maybe some of them are similar in appearance to this terrestrial karst carved by an ancient waterfall?

TOPOGRAPHIC ASSESSMENT OF HOLLOWS ON MERCURY: DISTINGUISHING AMONG FORMATION HYPOTHESES

Now let’s transition to Mercury, while staying on the same subject of karsts. Or hollows, actually.

Hollows are curious depression spots on the surface of Mercury. Their origin isn’t fully clear yet. One of the explanations suggests that they are… karsts, too. But karsts formed through evaporation of some volatile material from beneath the dusty surface. 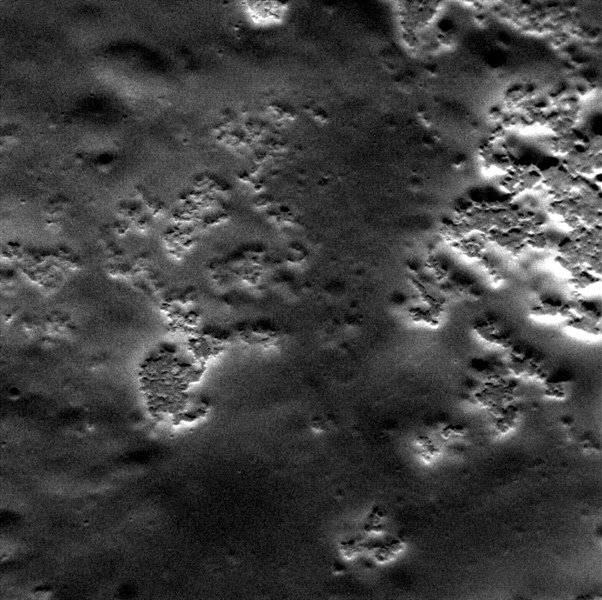 [Mercurian hollows. Yes, you should try to see depressions, not protrusions in these spots. And the “bumps” are craters. Sometimes rotating an image can help, so I added a rotated version. Another trick to assist with “flipping” the picture inside out is stepping back and temporarily defocusing one’s eyes. Image Credit: NASA]

We don’t know what that material is, although most likely it is not water. And I don’t know whether the hypothesis is correct. I just enjoyed some pictures of prominent hollows presented at the talk. I recorded their NASA numbers, I found one of them in the Messenger catalog and posted here after some contrast enhancement. To my defense I shall mention that author’s photos were processed, too — and some looked much better than my version: 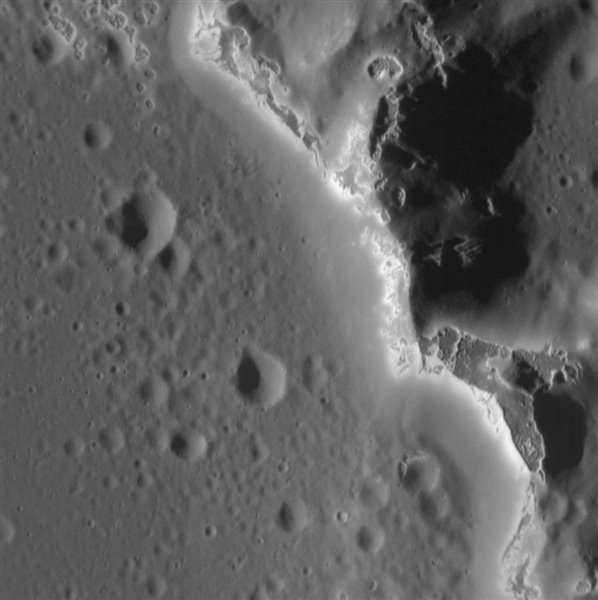 OXYGEN DEPLETION ON THE SURFACE OF MERCURY: EVIDENCE OF SILICON SMELTING?

Yet MESSENGER’s instruments see only abundances of those atoms – not the chemical bonds between them or mineralogical composition. To obtain the latter, usually it is assumed that all metallic elements are fully oxidized. For instance, that Silicon is present as SiO2, Titanium as TiO2, Aluminium as Al2O3, and so on. Then, the minerals are “constructed” out of these oxides (e.g., Andalusite Al2SiO5 is represented as Al2O3 + SiO2).

That usually works well – but not for Mercury. There seems to be not enough Oxygen to bind all metallic elements while maintaining the measured Oxygen to Silicon ratio O/Si = 1.4 ± 0.03 (and even less, as the abstract suggests).

As an attempt to explain that discrepancy a hypothesis is proposed. It states that deep within Mercurian interiors smelting of metallic Silicon is possibly happening. The ingredients for it are Silicon dioxide (quartz, SiO2) and graphite which, as we strongly suspect, is present in significant quantities within Mercury’s crust.

If that is true then 12.6–17.9% (by weight) of Mercurian northern hemisphere could be made by pure Silicon or Silicon-iron alloy.

Why is it interesting? First, you don’t often meet metallic Silicon in nature. More importantly, on all other rocky bodies (such as Moon, Earth, or Mars) oxygen is plentiful to have oxidized everything that could be oxidized. Why is it different on a well-fried-through Mercury? That remains an open question. 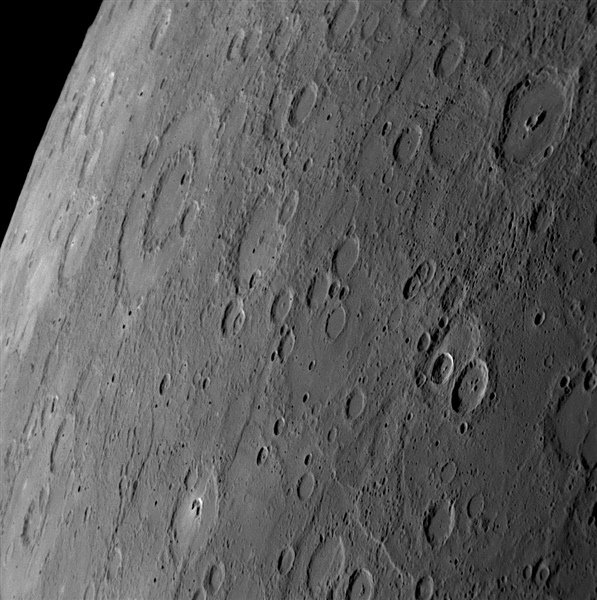 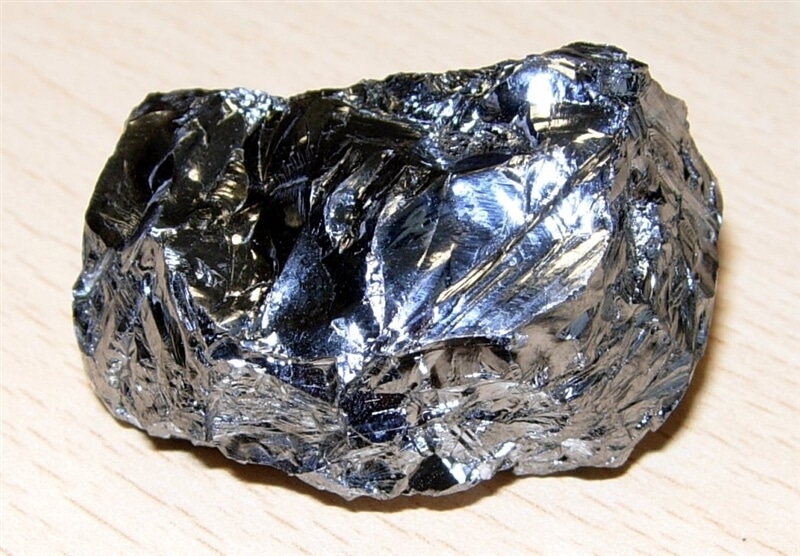 I thought that I knew quite a lot about the Moon. Yet I had no idea of so-called lunar swirls.

They were discovered in 1960s, but their nature remains elusive. They are strange white markings on the surface of the Moon. Often bended, often curved, they frequently display somewhat periodic patterns, resembling those inflicted by a magnet to a CRT monitor. That lends credibility to interpreting lunar swirls as areas protected from the solar wind by natural magnets buried underneath the surface. Whether those magnets are solidified ancient lava tubes, or remains of iron meteorites, we don’t know. In fact, we still don’t know whether this explanation is correct — although swirls are associated with magnetic anomalies detected from the orbit.

The rest of the work was concerned with estimating the parameters of those putative magnets. And I enjoyed a very thought of a natural invisible shield protecting lunar surface from solar radiation…